What is Laser Cutting?

What is Laser Cutting?

Continuing on our theme of customer education, below is an article on what laser cutting and profiling is. It’s a bit scientific but an interesting read none the less. Hopefully it gives you a greater insight into another one of our service areas. It may also help to explain how our work looks so good. If you have a project or an idea of a project then give us a call to talk through it. 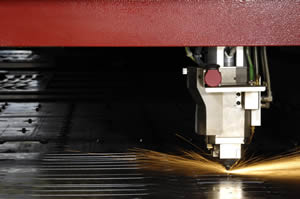 What is laser cutting?

Lasers are high powered beams that can be used to cut various materials. The beam is so intense that it melts, burns or vaporises anything in its path. Generally, the laser beam is focused through a lens and can produce a kerf as narrow as 0.10mm, depending on the material thickness.

There are several types of laser cutting technologies, including CO2 lasers, fibre lasers and crystal lasers, each of which is suited for different materials and applications. CO2 lasers are based on a carbon dioxide gas mixture that’s electrically stimulated. They are the most widely used laser type as they can be used on a wide range of materials, particularly plastics and other non-metallic materials.

Unlike CO2 lasers, fibre lasers (a type of solid state laser) are amplified in a specially designed glass fibre, which produces an extremely small focal diameter. This not only increases the intensity of the laser up to 100 times higher than that of a CO2 laser, but makes it ideal for cutting reflective metal material.

Finally, as its name suggests, crystal lasers use a crystal as the lasing medium, namely the neodymium-doped yttrium aluminium garnet (Nd:YAG). They produce the same wavelength as fibre lasers, making them suitable for marking metals and plastics. However, crystal has a shorter service life than the fibre laser, and includes relatively expensive pump diodes, which are wearing parts.

While the early laser machines may have struggled with inconsistent beam delivery and the effects of ambient heat on consistency, today’s machines are able to produce better edge quality, cutting speed and lower tolerances than ever before. This is as a result of the superior drive technology, piercing capabilities and control software.

About the Author: Mike Keats